Nearly 10 years ago, the Gryphon Diablo brought newfound credibility and respectability to the humble integrated amplifier. Previously the object of widespread scorn from audiophiles, the full potential of the integrated amplifier was finally realised in the Gryphon Diablo, so far ahead of its time that it – with typical Gryphon longevity – remained the absolute reference in its class for a full decade.

Gryphon Diablo is quite possibly the most popular High End integrated amplifier of all time. Despite sales of thousands of units, its virtual absence from the second-hand market is a reliable indicator of the extreme loyalty of Diablo owners.

Fortunately, in designing the Diablo 300, the Gryphon crew had the luxury and privilege of being able to draw heavily on concepts, components and technological breakthroughs that emerged during the evolution of the much lauded Gryphon Pandora preamplifier and Mephisto power amplifier.

Because it operates without negative feedback, the Gryphon Diablo 300 avoids both the intrinsic time-delay caused by sending the output signal to the input for a comparator loop and the resulting intermodulation distortion between time-offset signals.

To dissipate heat generated by the increased power of the Diablo 300, the unit is fitted with twice as much heatsink area as its predecessor. The highly efficient recessed heatsink array is cleverly integrated into the smooth exterior for a stylish statement that takes the Diablo 300 architecture well beyond the realm of undistinguished laboratory styling common to so many High End audio components. 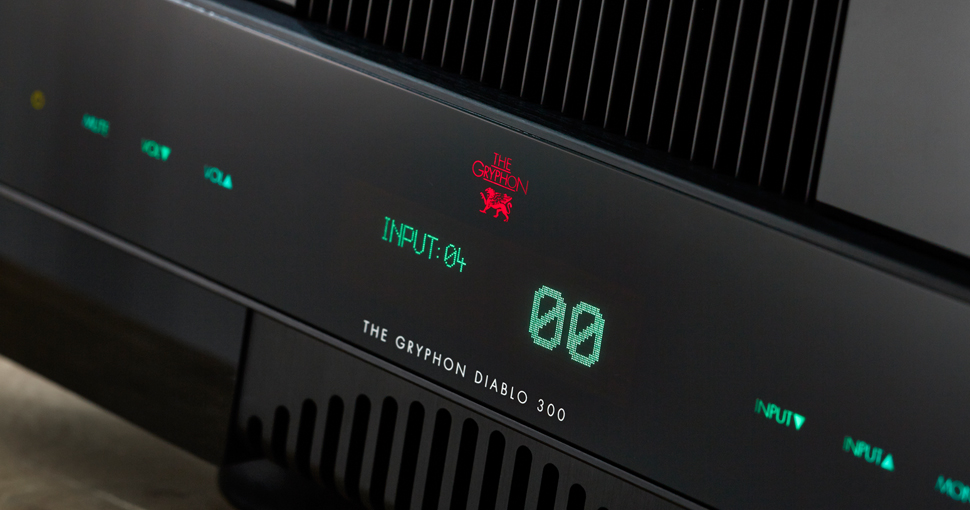 At the time of original purchase or as the need arises at a later date, Gryphon Diablo 300 can be fitted with a specially designed Gryphon DAC PCM/DSD module based on the innovative, award-winning Gryphon Kalliope digital-to- analogue converter. The module adds five digital inputs (USB, balanced AES 115 Ω, optical and dual S/PDIF 75 Ω). USB can process PCM up to 32-bit/384 kHz as well as DSD (Windows OS up to DSD512, Mac OS up to DSD128, Linux OS up to DSD128 DoP).
The remaining digital connections can handle PCM up to 24-bit/192 kHz.

This future-proof digital module is ready for any current or foreseeable high resolution digital format. 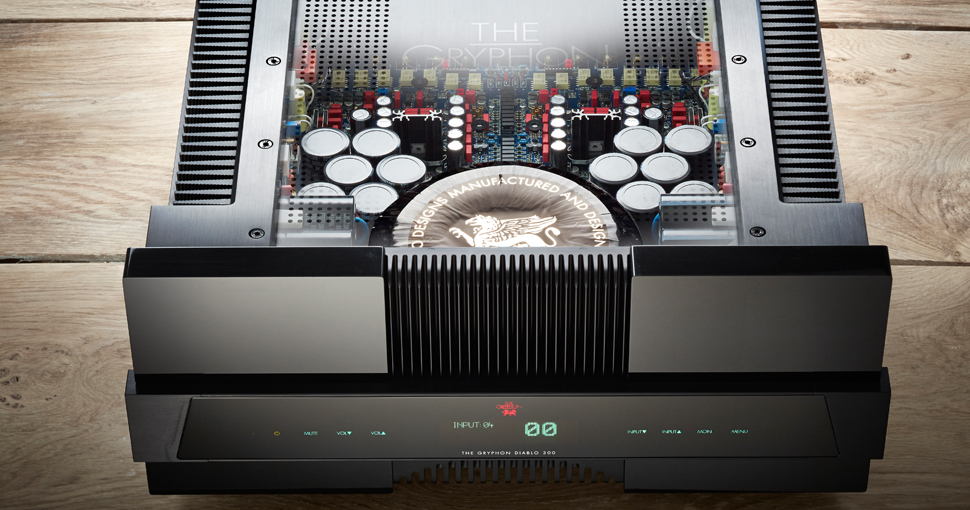 And, in the finest Gryphon tradition, the Diablo 300 offers the option of an exceptional MM/MC phonostage for the dedicated enthusiasts who continue to enjoy the musical treasures etched in the grooves of the long-playing, black vinyl disc.

I had the opportunity to evaluate the Diable for two days. The unit was well played in by its owner and ready for testing.

Most of the testing was done with very well recorded hires FLAC files and Audiophile vinyl. Music ranged from Jazz to Techno, Classical and single instruments. Male and Female voices.

I’ll start with a small statement: Its AMAZING. There, review done… 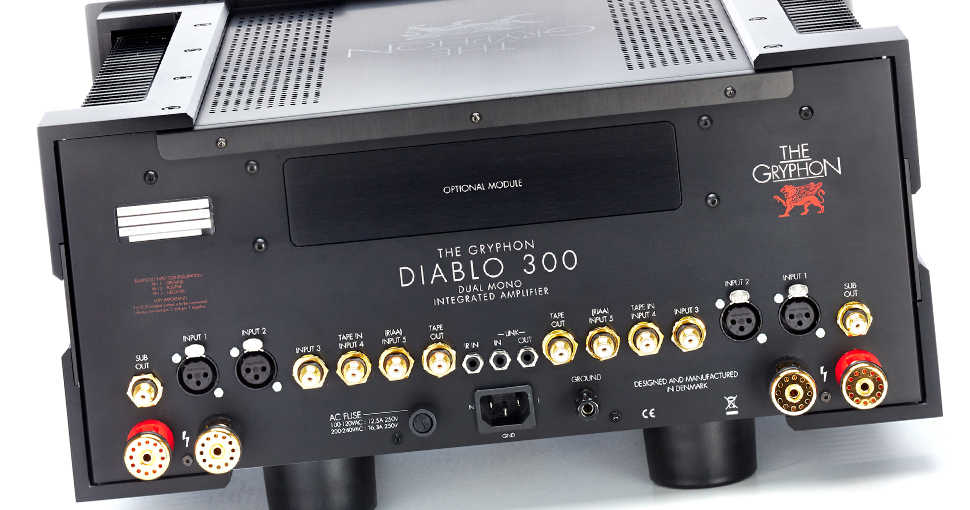 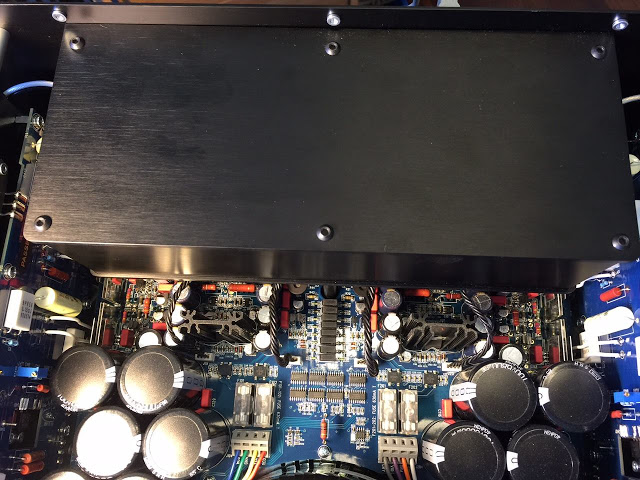 But lets dissect that statement a little. This a 20000+ Euro machine. It is NOT cheap by any standard.

Its mid-range tops the other two.

It has prodigious power, FAR more than the XA30.5 here, and it shows. The Amati’s found themselves in a vice-grip. The bass drivers under utter control.

I cannot fault the amplification at all. It runs hot but that is expected.

Did I detect a slight “glare” at high volumes ? Listening to to Krell I feel not enough to be a criticism.

Now here we have an amazing preamplifier. How can I seperate it from the power amplifier ? Rather easy in the end.

Its what it adds to the amplification stage. I feel this is where the soundstage is born. I never heard amplifiers just throw a massive stage. But I have heard modest preamplifiers do that.

This one does just that! It stretches the music out beyond the speakers, left to right, back to front.

I compared it to my reference the unknown MingDa MC300b based valve pre-amplifier. Notice I did NOT compare it with the very fine and outstanding SS pre-amplifiers available.

It is because it somehow manages the airiness and sparkle of a mighty fine valve. There is a sense of envelopment, just a sense but there. Its crystal clear, but fine like dust. Alive 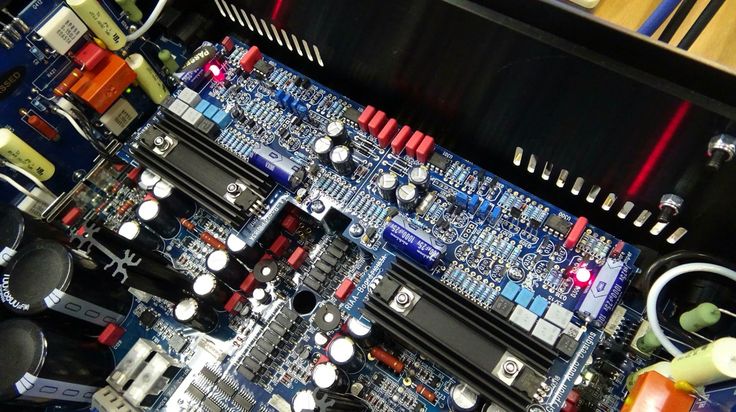 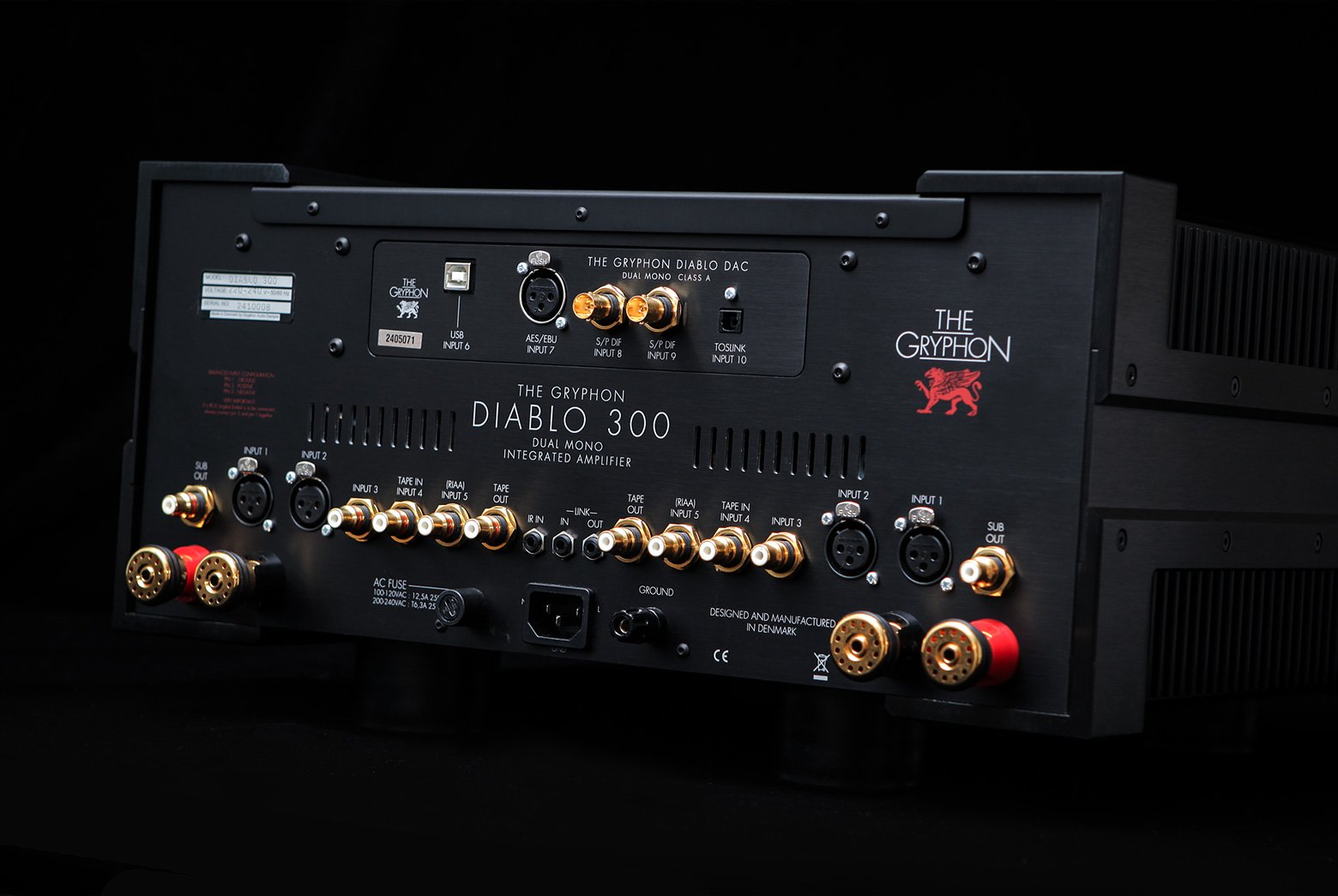 This is where things really became interesting. A DAC included here. Things getting rather busy at the back.

How good can this be ? Apparently VERY good to stunning. So in goes the EMMLabs analog on one side, both fed via USB. Hires 24/96 and some well recorded demo file and the game is on.

The first time ever where I heard two DAC’s definitively take 1st or 2nd place ! Like an 800m Olympic race. The EMMLabs is a legend but this DAC competes. Every song. Yes it has to bend the knee now and then but it also took honers frequently. Wow.

I cannot see any listener not loving the DAC in the Diablo. Or seriously thinking to upgrade. You will have to settle for a Mega-DAC’s to upgrade.

Well it does EXACTLY what a remote must do! Its unique, polarizing and I like it. Better than most I had in my hand. Rather on the “sharp” side. Not to be put on delicate wooden furniture.

PhonoStage
Here I want to critisize Gryphon. Come guys make a little bit more of a noise about this quite excellent upgrade ?

Its a very good phono MC and MM. Im still hunting and scouring the net to find some more info to paste here…. 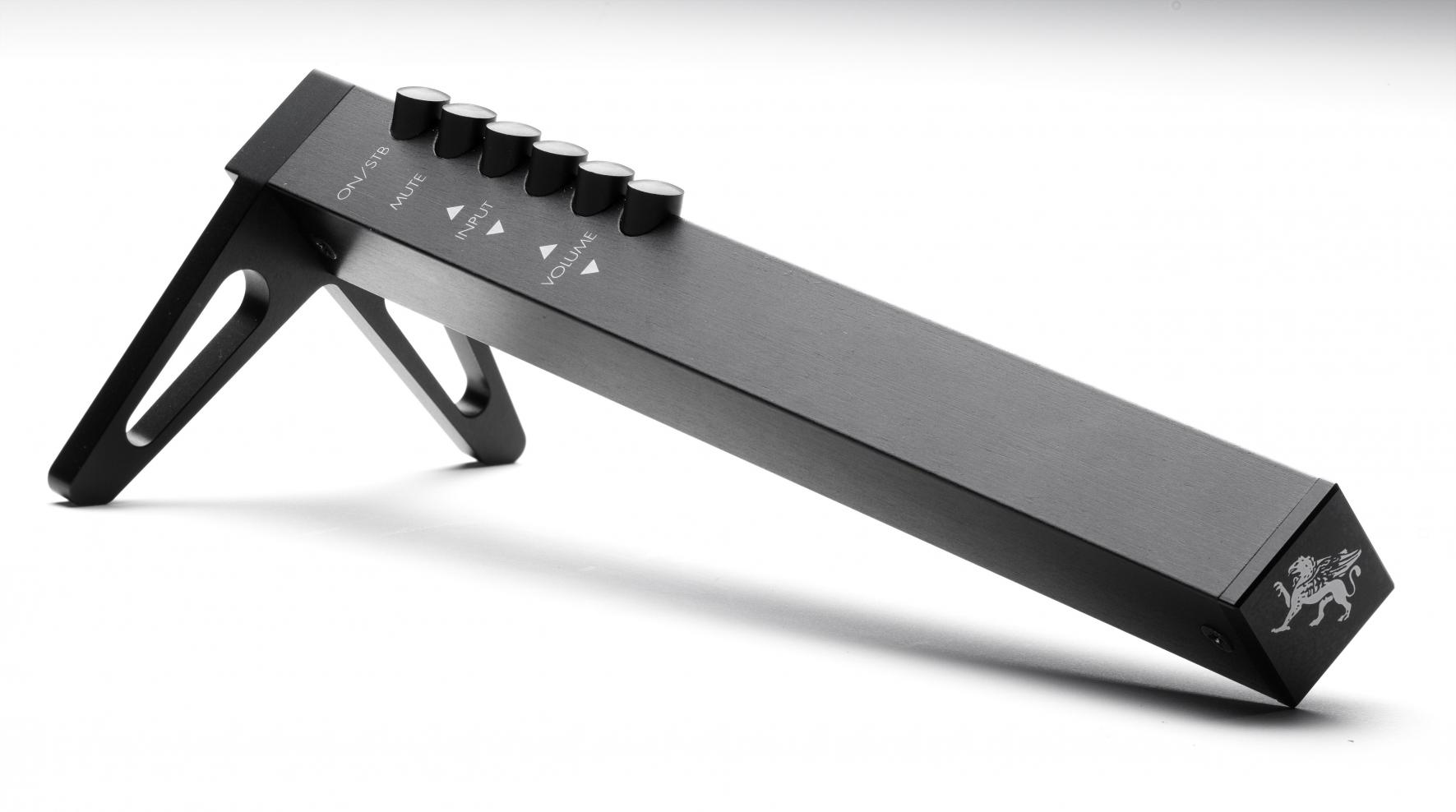 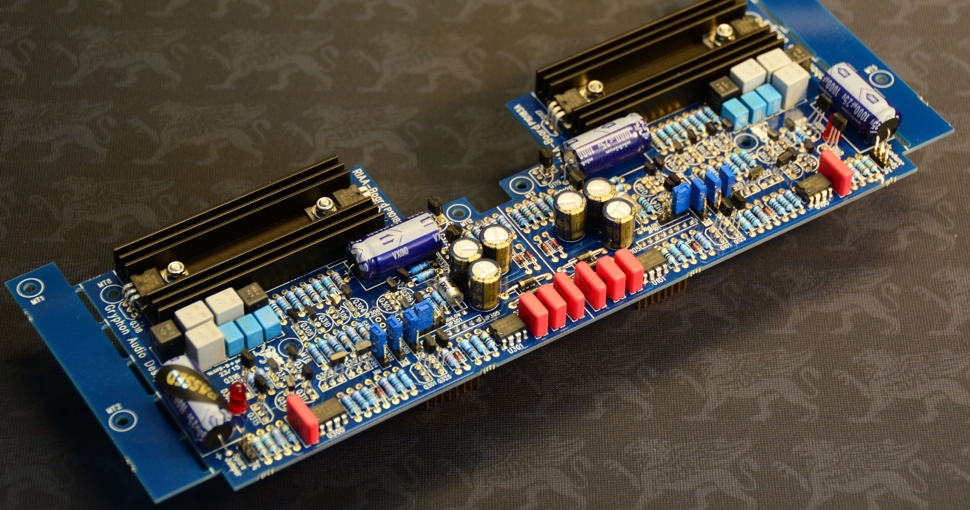 Well here it is. It blue and has the following specifications:

This without any effort the best Integrated amplifier I have heard. It is better than most separates I have heard too.

I cannot see any buyer upgrade from this without spending two to three times more of his hard earned cash.

The DAC makes this Integrated a relative bargain. It elevates it into a complete setup without any component having to make excuses for the other.

And as a bonus there is a very good photo-stage too.