Being an integrated amp, it boasts what no separates can: absolutely no interface problems between preamp and power amp because the output stage of the former is optimised to drive the latter. It’s an argument even separates supporters such as I cannot deny, but it’s indicative of both the increasing popularity of high-end integrated amps and the appearance of so many superb examples of the genre over the past two years. MF also prefers such practices as employing minimal levels of feedback, a completely separate choke-regulated power supply for the output stage and completely separate power supply for the driver stage.

And what a pay-off! The Tri-Vista behaves more like a big mutha pre/power combo than any of the super-integrateds I’ve reviewed lately, especially in the way it acts like it respects neither boundaries nor limitations. I don’t know if sheer force was as much a part of the design brief as finesse and delicacy – they’re of equal worth in the Michaelson canon – but the Tri-Vista exhibits a sense of brawn which places it above nearly all of the other integrateds I’ve tried. It certainly stomps the Pathos Logos also reviewed in this issue for grunt, but it is, equally, lacking much of that amp’s warmth. So, before we go any further, let’s make this bit perfectly clear: if you need an amp with plenty of muscle and simply cannot or will not offer shelf space and AC sockets to two components, put the Tri-Vista on your list. It’s also the primary gain, though there are other less significant ones, over the still thrilling Nu-Vista M3 integrated.

What the grunt has to do with the 5703 valve itself is negligible; rather, it’s a by-product of the output stages and the power supplies, the 5703’s role occurring before that part of the chain. Oddly, given the more tube-like appearance and nature of the 5703 itself over the nuvistor, the Tri-Vista exhibits less valve-like behaviour than the M3, as cited above with the delicious Pathos Logos. 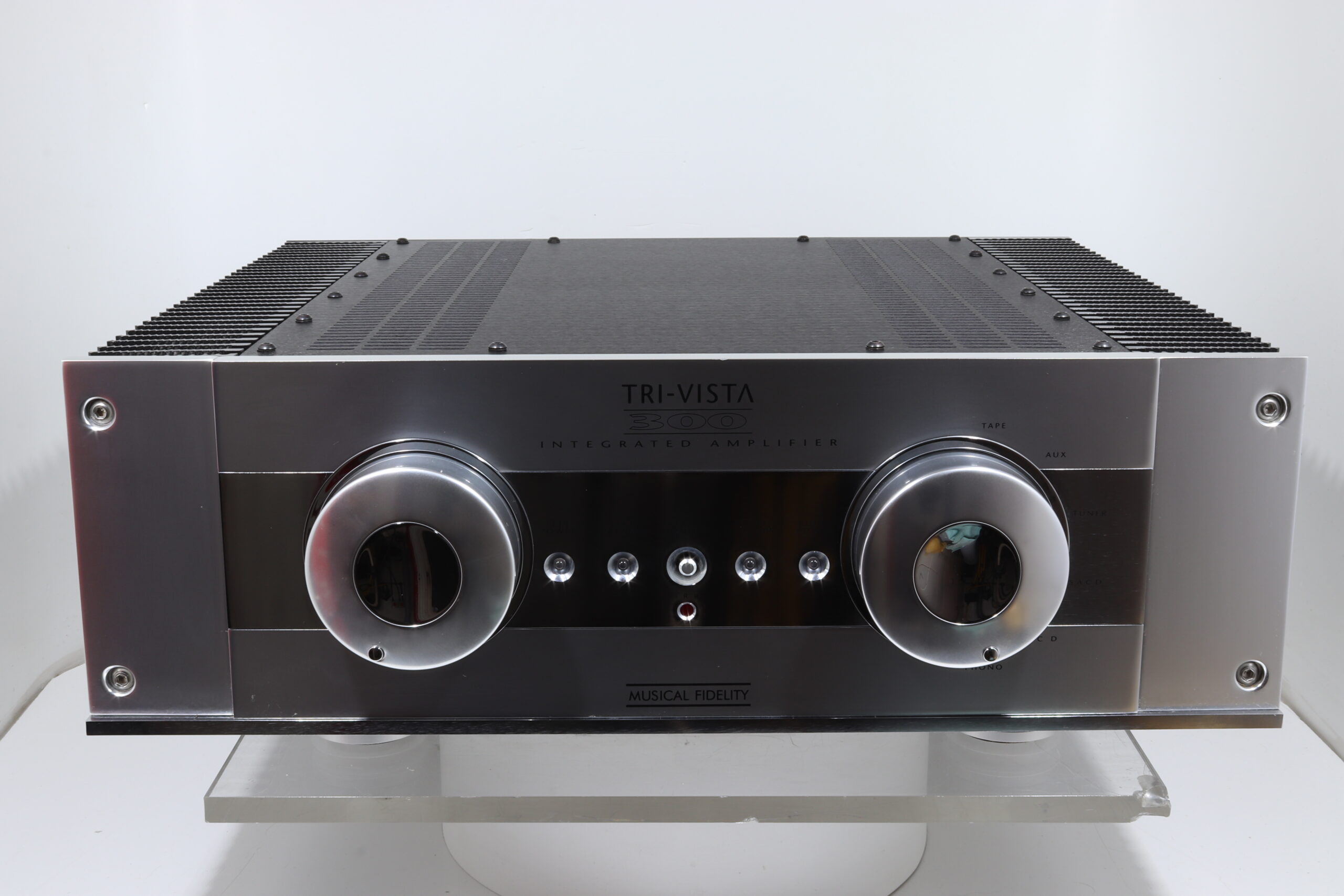 A Tri-Vista 300 will set you back 3,995. For the money, it’s a champion, able to strut its stuff around 6000 pre/power combinations and, in terms of sheer power, run rough-shod over any other integrated amps I can name. But it has a more forceful, distinctive personality than, say, the Nu-Vista M3, that amplifier being its clear antecedent. The 300 imposes itself on the signal in ways some may find disconcerting at worst. Conversely, the three areas where it really pees on the tree are its sense of three-dimensional space, its bass extension and power, and transient attack. Combine the three, and you’re talking about an amplifier begging to rock your world.

Take, for example, the newly restored, cleaner Rolling Stones recordings on the 40 Licks collection. Note that this is a CD, not part of the SACD reissue programme. And, yet, side-by-side, the Tri-Vista made the CD sound more like an SACD than ever would I have imagined, nearly matching the SACD’s slam and lack of grunge. Honky Tonk Women, though notorious for its tape hiss, is a perfect example of how the Tri-Vista deals with every aspect of the reproduction of percussion, slam and transient behaviour. The cowbell and kick-drum at the beginning, the sharp, distorted twang of the guitar – each has its own space, its own textures, its own damping, the instruments floating there for you to home in on, but still part of a cohesive whole. No break-up, no congestion, and yet there’s so much going on in the that track you can only wonder how it’s all juggled with such ease. Just like the SACD, in fact.

A more delicate work, ‘Mean Old Man’ on James Taylor’s new CD, October Road, starts off with a wash of silky strings and an acoustic guitar, followed by a some jazzy piano – very Chesky-like and glossy. You discover immediately that there’s more warmth to be had from the Nu-Vista, but the Tri-Vista’s portrayal, just because of its greater openness and ‘cleaner’ air, somehow seems more intimate. Why? Because you can ‘feel the space’.

Calling the shots on this amp is tough. It clearly excels for conveying a sense of majesty. It has energy galore, lower registers which will wrest tears from fans of Kodo drumming. It impresses on every level. But it is not warm, fuzzy and cuddly. It does nothing to ameliorate treble excesses, it will not gloss over anomalies with euphonic sleight-of-hand. Thus, it’s a more difficult, less forgiving amp to possess than the Nu-Vista, the Pathos Logos or even rivals from Gryphon and McIntosh. But, leaving its martinet mien aside, I suspect the Tri-Vista 300 may emerge as a highly-coveted future classic.

STRENGTH:The smoothness, the detailed sound, the authority (this amplifier is a “tour de force”). The sound of the tri-Vista has the delicacy of a butterfly, the agility of a leopard and the strenght of bull. There are many powerful amplifiers but the don’t play with such a “finesse”.
The Tri-vista can pull out the true soul of your speakers. Wire them to the Vista’s and they shall play like never before.
At the moment you can buy one unit of the few hundreds produced worldwide in the net at a good price.
WEAKNESS:Nothing is perfect, and there are two things that are hard to explain in such a beautiful (and expensive machine):
– Very poor remote control (made of plastic and poor design);
– No XLR inputs (all the inputs are RCA). 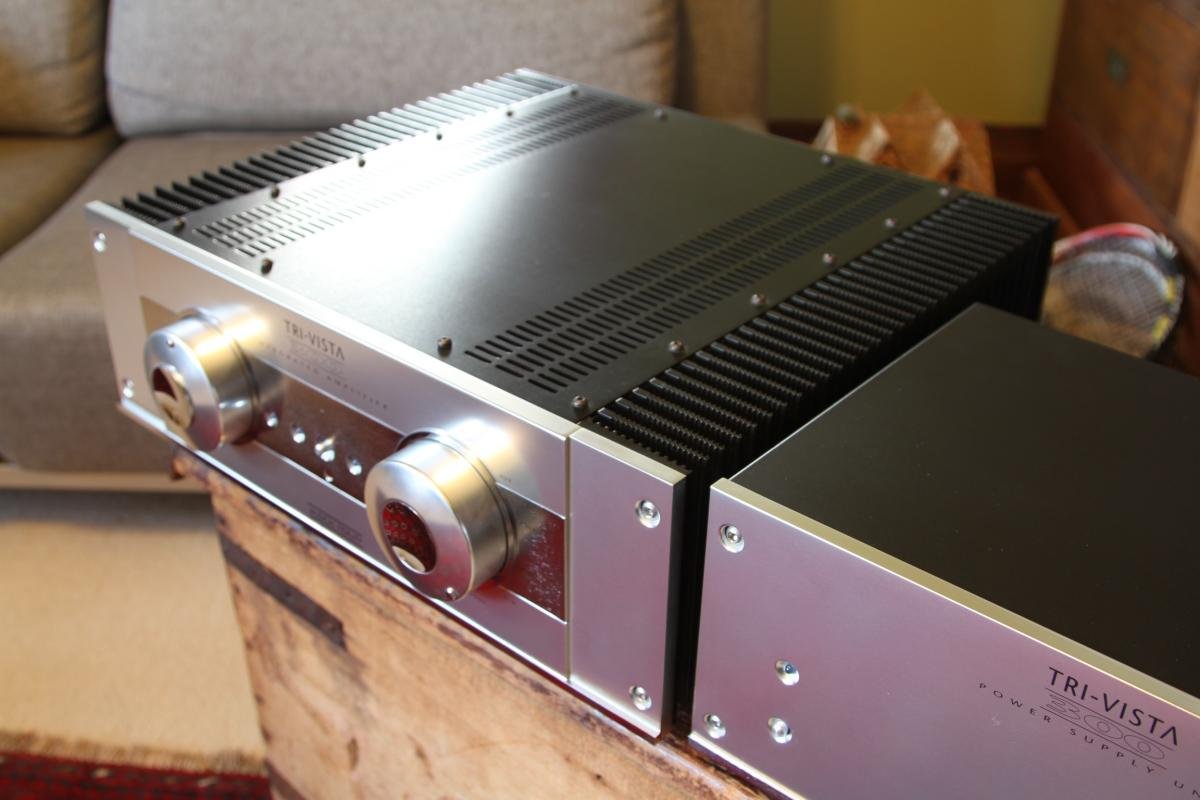 This is one of the best integrated amplifiers ever made, period.

The Tri-Vista is phisically divided in two sectors: power suplly unit and the Amplifier itself. These two units are linked by three cables: 1 for signal and 2 main power cables providing all the required energy to drive the massive power of the amplification section. The complete set weights more than 40kg, so a good and stable rack will be a must to place ths jewel.

In terms of design we can find two major wheels in the front panel: one for volume, the second is the source sellector. I personally love the constrast between the plated face and the blue lights of the unit: 4 small leds indication that the tri-vista valves are now switched on and the lights in the feet on the units (they turn form orange to blue when the unit is heated for optimum performance – which takes about 20 minutes). At night with low level of light, the Tri-Vistas blue feet look like £1M fantasy.

Regarding to connections, the Tri-Vista allows multiple inputs, including a high quality phono (MM/MC) input. There is also an pre-amplifier to power output and connections for two pairs of speakers.

Once you press the power button, it is necessary to wait about one minute before you can start listening. During this time, place your favourite CD or Vinyl in the player sit and relax. Then… Uauhhh…. the air, the rich detail, the smoothness of the sound is amazing. After a few seconds you are so envolved with this beautiful sound that you instictivelly grab the remote and increase the volume. At that moment you are inveded with a new experience: the authority of the Tri-vista. When the potentiometer is at 10 o’clock (it goes from 7 to 5) your room is fullfilled with an amazing sound but everything is still controlled, the sound is still detailed and envolving. The instruments are still placed properly and the voices are fresh and clear. This state of the art amplifier has the hability to extract the full potential of any speaker, no matter how hard they are to drive.
First time I played the Tri-Vista was like a release of my speakers from the jail. They were playing like they were still packed inside the original card boxes… then the sound came out.

The Musical Fidelity Tri-vista integrated amplifier was classified by Stereophile magazine like one of the three best integrated amplifiers ever made. The main difference is that the other two cost 4 or 5 times more, and no way they play better than this jewel.

To conclude I would like to say that only by the time I tried the MF Tri-Vistas, I realized what is the true role of the amplification in a hi-fi (hi-end) system. If you make an audiction to this Musical Fidelity after reading this review I am sure you will understand what I mean.