The X100L digital music server incorporates many innovations originally developed for the higher priced Aurender N10 and W20 models, including a solid-state drive cache for playback which eliminates jitter, latency and electrical/acoustic noise from spinning hard drives. and compact discs. The high performance USB Audio Class 2.0 digital audio output was developed using some of the same engineering techniques as the USB outputs on the Aurender N10.

For network connectivity, streaming, upgrades and file transfers, the X100L has a Gigabit Ethernet port along with two USB 2.0 data ports for copying files from USB storage devices.

The dedicated USB Audio Class 2.0 output is designed to deliver an exceptionally transparent audio signal free of noise and is shielded from outside electronic interference.

The internal hard disk drives are damped to minimize vibrations and noise.

Best performance occurs when music is stored on the Aurender’s internal storage. However, the Aurender platform is also capable of seamlessly integrating content stored on a NAS or external USB hard drive.

No matter how many times I sit down to listen to a new component, I continue to be amazed at how much difference a single component can make. Even so, with a music server — which replaced, in this case, an aging Apple MacBook laptop — I would not have predicted the magnitude of change I heard. After all, I know that my MacBook is passing along to my digital-to-analog converter a bit-perfect signal, and that when those bits reach the DAC, the signal is reclocked — at which point, you’d think, any vestiges of any sonic signature of the preceding component would be stripped away. But despite the seeming airtightness of this logic, when I inserted the Aurender in place of the MacBook, I instantly heard an improvement. Most aspects of the sound remained the same, and the tonal balance didn’t change at all — no increased bass, no more-prominent highs. Nor did the soundstage get bigger, or the imaging more precise. In many ways, the sound I now heard was just the same as before, and a good thing too — for weeks, my system had already sounded ultra-dialed-in.

Still, the sound was better. I remembered having heard the same phenomenon a couple years before, when I first connected the Aurender S10. My first thought then, odd as it might seem, was that the sound was calmer — as if the music were flowing through my cables and components with greater fluidity and ease. Admittedly, that’s not a very concrete description of what I was hearing. I listened some more. 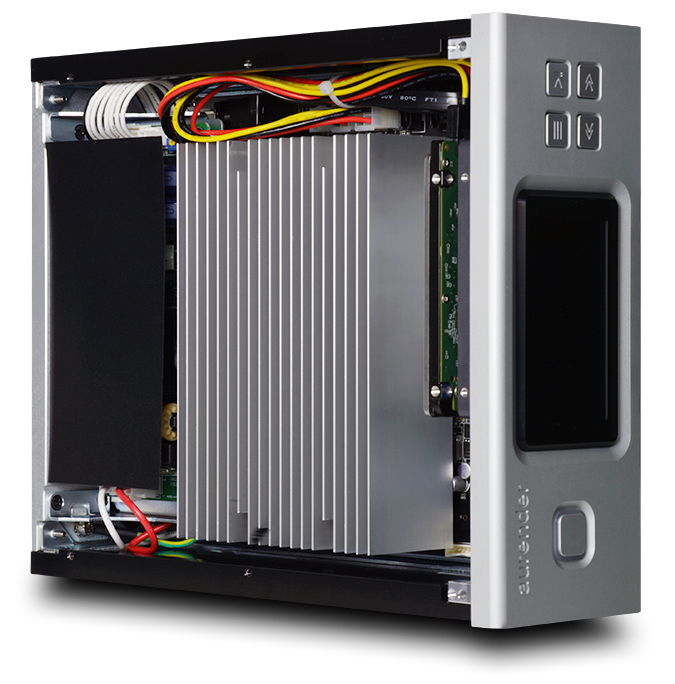 The Aurender X100L is a welcome product, and I’m glad to say that all of my initial concerns about compromises of quality in a less-expensive model were unfounded. More important, my high hopes were met and then some. The Aurender Conductor app makes browsing music files a snap — I saw several attractive ways I could use the app for my music library, were the Aurender to become a permanent part of my system. I think most people will be able to adapt to the Conductor quite easily.

Most important, the sound of my system improved. The caveat is that it improved only with certain types of music — simpler arrangements of soloists, or smaller ensembles of only a few players, and more from the midrange on up. Of course, this describes much of the music in many audiophile collections. If you want to be able to hear deeper into a whistle, a whisper, a solo acoustic guitar, or a cymbal’s shimmer, the Aurender X100L might be exactly the right product for you.

If you’ve wanted an Aurender S10, but were put off by its price and don’t need its myriad connection options, then I see nothing that should hold you back from the X100L. It’s a killer little product.