Fifth, there is the unusually lifelike way that the 610T delivers power. It is a bromide to say that a tube amplifier clips “softly,” rounding off transient peaks when it runs short on steam rather than shearing them off the way a solid-state amp does (with subsequent audible distortion). However, it is one thing to clip softly; it is another not to clip at all. We are talking here about a monoblock amplifier that is capable of 630 watts of pentode power into any load. Unless you’ve heard a tube amp that is this seemingly unrestricted in power, you may have trouble understanding how smooth and unstrained—how non-hi-fi—the 610T sounds. Gone is not only any clipping distortion but the very sense of a dynamic ceiling hanging above the music. I think the best way to conceptualize this, at least for those of you who know your recordings, is to think of an album in which dynamic limiting has been deliberately applied— such as an old RCA Dynagroove—and then think of an album in which no limiting has been used—like a Sheffield direct-todisc. The 610T consistently sounds like the Sheffield, and makes most other amps sound like the Dynagroove.

Getting rid of any of the usual chokes on power delivery has a wonderful liberating effect on music of every kind. It is not that music will play “louder” with the ARC 610T, although it will; it is the way it gets loud that is so uncannily lifelike.

Take a tenor voice, such as Mario Lanza’s on “Il lamento di Federico” from Cilea’s L’Arlesiana (Mario Lanza Live in London [RCA]) for example. Part of the reason why a tenor voice is no snap for an amplifier to reproduce (and why it can cut through dense instrumental textures and seemingly soar ahead of and above an entire orchestra) is the tremendous amount of acoustical power it has in the 2–3kHz range (the “formant” range for higher-pitched male singing voices), for which see the chart to the right, reprinted from the late John Eargle’s superb text Music, Sound, and Technology (Van Nostrand Reinhold, 1995].

A powerful tenor can reach astonishing dynamic peaks on fortissimos. Indeed, this Lanza recording has undone many an amplifier at CES and in my home. At lifelike levels, during the searing climax of the Cilea aria, most amps simply hit the wall—making Lanza’s gorgeous voice sound progressively rougher, shriller, flatter, “beamier,” as he nears the crescendo’s peak, before shattering at the peak itself as if from mike overload.

Rather than roughening and flattening Lanza’s voice during the crescendo of this aria and then clipping at its climax, the Audio Research 610T has the power reserves and the natural delivery to project it, making it sound bigger rather than beamier, fuller rather than flatter, stronger rather than shriller, more forward rather than more recessed as he builds to the crescendo and then to simply sail through the peaks without any loss of composure or impact. I’ve called this ability to realistically reproduce the way imaging changes with changes in dynamics “action” or bloom, and the 610T simply handles vocal and instrumental action better than any amplifier I’ve yet heard (and, in so doing, makes instrumental dynamics more lifelike than any other amplifier I’ve yet heard).

Finally, soundstaging, always an ARC strength, is here taken to a new level. On a great orchestral recording like Lutoslawski conducting the Nationales Symphonie- Orchester des Polnishcen Rundfunks in a bracing performance of his own Concerto for Orchestra [EMI]—one of the truly great pieces of music of the second half of the twentieth century—the 610T fills the back third of my room with a virtual orchestra, Lanza’s voice as he himself was projecting wall-to-wall, wall-to-floor, floor-to-ceiling. Even on smaller-scale music, like Joan Baez and the Greenbriar Boys singing “Banks of the Ohio” [Joan Baez, Vol. 2, Vanguard], the 610T will fill the space between speakers and boundaries with near-life-sized images of Joanie, her backup singers, their instruments, and the ambience of the recording venue. (There are reasons why manufacturers of big speakers, like Dave Wilson, often prefer the 610T—they will drive any speaker and fill any space, no matter how small or large, with music.)

I started off by saying that it wasn’t the individual virtues of the 610T but their synergy that makes the amp so special, because what all of these things add up to— the improvements in neutrality, coloration, imaging, resolution, transient response, power delivery, action, and staging—are a huge improvement in transparency to the source. By this I mean that the 610T imposes less of its own signature on whatever LP or CD it is playing, and in reducing its own signature reduces our sense of listening to and through an electromechanical chain of hardware. I’ve always felt that the first obligation of any piece of stereo equipment is to disappear as a sound source. The 610T does this to an extent I’ve never before experienced with an amplifier. For the most part, it simply lets you forget you’re listening to a hi-fi.

Oh, there are still a few areas where the 610T reminds you that it’s there. For one, it is consistently a little forward sounding, starting its imaging nearer to the plane of the speakers, rather than deep behind them. For another, as good as the 610T is in the treble, you cannot listen to it in comparison to a great solid-state amp like, say, the GamuT DI 150, and honestly say that it has all of the top-octave speed, focus, and detail that make something like the piano on the truly superb Decca Headline recording Mr. John Cage’s Prepared Piano so uncannily like a virtual choir of cymbals, bells, and drums. Through the 610T, all these sounds will be somewhat more relaxed, more gemütlich. (Paradoxically, this isn’t as true of the low bass, where the ARC will reproduce ostinatos like the deep cello and doublebass pizzicatos at the start of the Passacaglia of the aforementioned Lutoslawski Concerto for Orchestra with precise pitch definition and astonishingly realistic air and speed.)

This 170-pound bad boy can output gobs of power—600 watts continuous (20Hz-20kHz) into 4, 8, or 16Ω, with –3dB points at 15Hz and 150kHz. Of course, that much power requires even more power from the AC outlet—1700W at rated output, 2300W maximum—and it generates a lot of heat. The vertical-tower chassis employs silent convection cooling, though an optional fan is available for CE compliance. 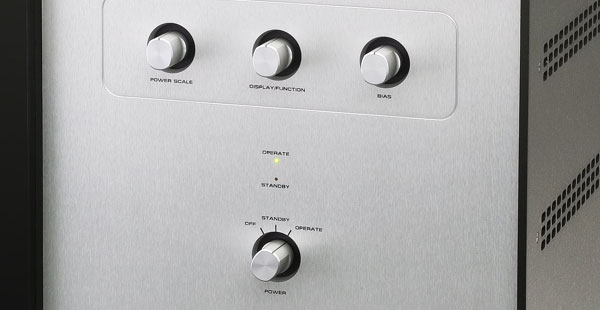 A vacuum-fluorescent, multifunction display can show the bias level on each tube, AC-line voltage, power output, and hours on the tubes. The amp is controlled with the front-panel controls or the included remote. 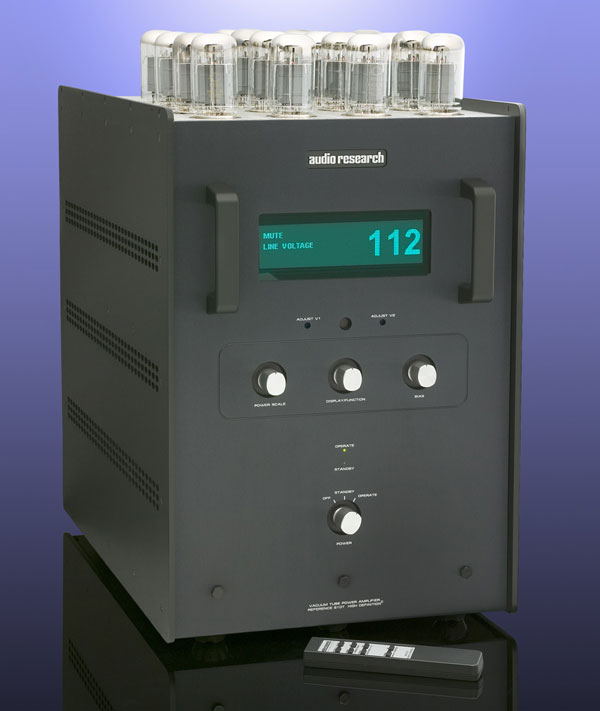 Naturally, a flagship product commands a flagship price—in this case, nearly $20,000 each. But just think about how all those glowing tubes will impress your audiophile friends!